Posted on August 9, 2012 by worldinvestmentgroups 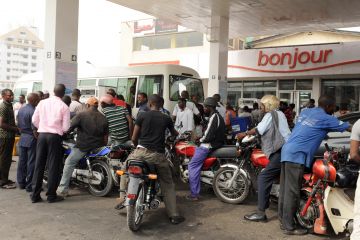 A Nigerian legislative committee has discovered at least some of the depth of the corruption surrounding its fuel industry.

Every day, fuel importers drop off 59 million liters of fuel. The country consumes 35 million liters daily. That leaves 24 million liters of oil available for smugglers to export, paid for by government fuel subsidies. This costs the Nigerian people roughly $4 billion yearly, according to Reuters.

“There is a gap of 24 million liters per day being funded by Nigerians as subsidy that was not utilized by them. This of course amounts to overpayment; or in other words, sharp practices,” Farouk Lawan, chairman of a House of Representatives committee probing subsidies, said on local television, according to Reuters.

Nigeria is Africa’s largest oil exporter, but it imports most of the fuel it uses at home. The nation’s four refineries are run-down, producing roughly 15 percent of their intended capacity, according to The Economist. For decades, the government has spent $8 billion a year subsidizing fuel imports, reducing prices for Nigerian people, almost all of whom live on less than $2 a day.

Critics say the subsidy also pays for and encourages corruption — the squandering of tax-payers’ money that could be spent on roads, schools, electricity and oil refineries. President Goodluck Jonathan says he plans to phase out the subsidy as a part of a move to clean up the Nigerian government.

But this may not be possible, given the mood of Africa’s most populous nation. After the subsidy was canceled on Jan. 1, fuel prices doubled and the price of food and transportation skyrocketed. Protests broke out across the country. Hundreds were wounded and 10 were killed in clashes with the police. Unions called general strikes, and businesses screached to a halt. The government finally caved when union leaders threatened to strike some oil companies, a move that could devastate the Nigerian economy and spike global oil prices.

On the streets, people called on the government to crack down on corruption — not the subsidy.  Protesters said no one believed the money the government saved by canceling the subsidy would go back to the people. The government reinstated the subsidy — or at least part of it — leaving the price of fuel 50 percent higher than it had been before Jan. 1, and leaders called off the demonstrations.

This leaves Nigeria in a conundrum. The subsidy appears to support institutionalized corruption, but the people of Nigeria will not support a government that cleans up its mess by taking money out of their pockets.
By: Globalpost.com