Posted on May 19, 2012 by worldinvestmentgroups 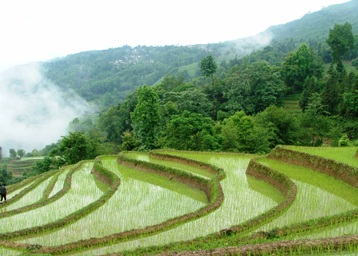 Why you should Buy Rice Futures

The world is finally waking up to the fact that global grain prices are destined to head higher – much higher.

Nasty weather in key agricultural markets around the world has savaged the global grain crop, meaning worldwide supplies can’t help but be squeezed. Australia, for instance, is experiencing additional flooding in areas that were already battered by the torrential rains of November, December and January.

And as if the supply-related increase in agricultural commodities wasn’t enough, there’s also the U.S. dollar – and the so-called “race to the bottom” – to contend with. Make no mistake: The endless devaluations in the greenback are having a worldwide impact on agricultural commodity prices. Since commodities are priced in dollars, these devaluations translate into higher prices for grains and other food-related commodities.

Short supplies and rising prices are bad enough, but concerns about these first two realities are creating an additional catalyst that completes a trifecta for higher agricultural commodity prices.

And that third catalyst is panic buying – especially with rice, which is a basic table staple in Asian markets. For instance, The Saudi Gazette last week reported that Bangladesh recently tripled its rice-import target and Indonesia just purchased 820,000 tons of Thai rice, nearly five times the volume initially sought.

“This is only the start of the panic buying,” Ker Chung Yang, a commodities analyst at Singapore-based Phillip Futures, said in The Gazette report. “I expect we’ll have more countries coming in and buying grain.”

For global investors, there are five reasons why it’s definitely time to buy rice futures.

Five Keys to Higher Rice Prices
Global food prices set an all-time record in January – reaching their highest level since the United Nations’ Food and Agriculture Organization began to track them in 1990. They even topped the previous highs set during the global food prices scare of June 2008.

“The new figures clearly show that the upward pressure on world food prices is not abating. These high prices are likely to persist in the months to come,” said Abdolreza Abbassian, an economist for FAO, which is based in Rome.

Food-price inflation has become a major issue in the world’s emerging economies – particularly those in Asia. Those inflationary pressures are now threatening to ignite a rally in rice prices – even though bumper crops in Thailand and Vietnam should mean there will be ample supplies. Instead, the following five reasons almost assure us of increased rice prices by the end of this year.

Rice prices will increase because:

* The aforementioned huge early Asian crop is allowing U.S. farmers to shift to planting higher-margin grains
* Panic buying by consuming nations trying to fight food inflation will escalate the price of existing supplies.
* The weather effects of La Nina are continuing to affect historical rain patterns.
* We expect an actual imbalance between world supply and demand by the end of this year.
* The United States is exporting inflation to the rest of the world, and will continue to do so for the rest of 2011.

Thailand’s benchmark 100% “B” Grade white rice was offered at $540 per ton last week. That price is unchanged so far in 2011 – after having fallen 13% last year. During the 2008 food crisis, rice prices exceeded $1,000 a ton – a spike in food prices so severe that the head of the United Nation’s World Food Program said it was causing a “silent tsunami” of hunger to sweep the globe.

While the Westernized nations continue to feel the effects of deflation and de-leveraging, emerging-market economies are having almost the exact opposite experience. And rice prices may be the ideal way to illustrate this economic disparity.

You see, rice is a staple food for half the world’s population – particularly in Asia. And though there’s a huge-and-growing middle class in Asia, there are still millions of households that exist at or near the poverty line. A big run-up in rice prices would squeeze their budgets and topple them into poverty – causing a wave of unrest that the governments of those countries would do almost anything to avoid.

Under normal circumstances, the inflationary effects we’re seeing would not be as damaging to the world food prices. But we are in a major global weather pattern shift that has changed the rain patterns around the world.
La Nina is causing heavy rains to locations that normally experience little to no rain. This has caused flooding in such global breadbasket economies as Australia and Brazil. It has affected the monsoons of India and weather conditions on the U.S. East Coast.

Rice analysts have labeled price inflation as a “near-term” event, stating that an expected surge in rice supplies provided by a strong harvest would halt – and ultimately reverse – the current run-up in prices.
But the supply increases won’t be as large as these analysts expect.

The U.S. Wild Card
The price increases in grains have led the United States to shift its historical growing averages. In terms of the global pecking order among rice exporters, the United States typically ranks as the No. 3 or No. 4 largest exporter.

But not this year.

In 2011, U.S. farmers are shifting to other crops, hoping to capitalize by boosting their output of soybeans over rice.

In fact, Bloomberg News has reported that U.S. farmers will plant the fewest acres of rice crop since 1989. And with good reason: other grains have better profit margins than rice, especially since Asia’s largest rice growers have a “bumper crop” coming to market this year.

“Why would you want to take that risk to plant rice, knowing that your income is going to be way down?” Terry Hatley, an Arkansas farmer who this year may not plant rice for the first time in three decades, told a Bloomberg reporter. “Farming is a business, and you’ve got to look at the economics of it. Now, the economics on rice are very dim.”

Because the U.S. crop lags its Asian counterparts, such changes in planting plans by U.S. farmers will affect worldwide rice supplies in six months to nine months.

The “Egypt Effect”
The uprising in Egypt has been directly linked to the cost of wheat, as Russia was the supplier of wheat to the Middle East region. This historical relationship was put into doubt when Russia cancelled its exports of grains last summer.

Egypt has started to go into the spot market to purchase more expensive wheat to feed its growing population. The uprising is going to play havoc with additional supplies arriving and being distributed to the hungry population. And Egypt is not the only nation that has had to make large bulk purchases of food to try to meet domestic demand.

Take Indonesia, which is the first of many nations to come to market in an attempt to make larger-than-normal purchases of a particular commodity. In large part because of runaway food prices, Indonesia is facing an inflation rate of better than 7% – in a year in which the inflation rate had been expected to decline.

Cheap rice has risen 22% in the past year. Cooking oil jumped 15% and various types of “chillies” zoomed between 90% and 314%, The Australian newspaper reported.

Now the largest economy in Southeast Asia is importing rice in bulk for the first time since 2007. And Jakarta recently made an emergency decision to temporarily halt import duties on foreign supplies of rice, soybeans and wheat to ease food prices and take the sting out of inflation.

In fact, as a longtime observer of the global markets, I’ve found it interesting to observe the differing strategies that governments around the world have resorted to as they respond to the events in Tunisia and Egypt.

After the global food prices scare of 2008, authorities around the world were aware of the risks and better prepared to cope with rising food costs this time around, says Indonesia central bank spokesman Difi A. Johansyah.

“We expect food prices can be controlled so they won’t raise inflation expectations,” he said.

Countries that operate under an autocratic government are announcing changes in their governments in an attempt to address the anger of a population that has no real say in deciding who will lead them. Shuffling the deck chairs on the Titanic has not fixed the problems before, and it won’t make a difference today.

The people are experiencing the pain that accompanies big increases in staple food prices. In such situations, it’s the price of the calories that drives the anger. And a fear of that anger will continue to induce governments to make the kind of hasty decisions that actually exacerbate the problem.

As investors in capitalist markets who will also feel some of that pocketbook pain, we have the ability to improve our lot by making investments that can offset the price increases. And we should make those moves now.